What Not To Put Down Your Garbage Disposal 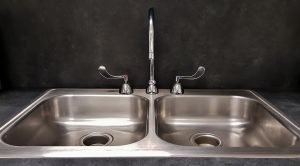 The garbage disposal in your kitchen sink is a useful convenience, and you should take care of it. It grinds up food waste into pieces small enough to make it through the pipes without clogging. But like any machine, you have to treat it properly or it will break down. Here is a list of things you shouldn’t put into the unit.

Coffee grounds are already small and granular, so they don’t need to be ground up further. But they can actually make a sort of sludge or sediment in your pipes that can cause a backup and catch other food too.

The blades of your disposal unit were not made with the power or sharpness to cut bones, so putting these down the drain will either just make them spin with the rotary blades, or prevent the unit for spinning at all.

Starchy noodles absorb water when they cook, but there’s no point at which it stops absorbing and stays the same. If left in water long enough, pasta will expand in size until either there is no more water to absorb or it has broken down into a viscous sludge. That won’t hurt your disposal, but it will clog your pipes.

Nuts have lots of starch and oil in them, which is why they can be ground into a paste for food. Peanut butter is made that way, even if peanuts technically aren’t nuts but legumes. You can actually make peanut home in a blender, in fact. The danger with the disposal here is that if you tried to put nuts into it, the blades might turn them into a peanut butter-like substance, which would then stick to the pipes, making further clogs more likely.

Although they may not absorb water like pasta, potatoes still have starch that will break down if left in water long enough

Hot grease congeals when it cools down, and it will cool down pretty quickly in the plumbing. Don’t risk getting solid grease stuck in your pipes. Let it cool down on its own and then throw it away.

Eggshells have a membrane on this inside that can wrap around the rotary parts and potentially impede or damage them. And while some people recommend them for sharpening the blades, they don’t actually do that effectively. Sharpening most blades takes long sessions of honing with specially designed whetstones, and you won’t get that effect from a few seconds of grinding eggshells in the drain.

Celery, corn husks, artichokes, and some kinds of squash have long stringy fibers that can twist around moving parts and slow down the impeller. Not only that, but the pulpy flesh of some fibrous vegetables is ideal for clumping up and making blockages. Just throw them away.

The simple fact is that your garbage disposal was not designed as an omnivore to destroy trash without having to change a bag. It’s only meant to handle small scraps of food that will inevitably go down the drain as a result of dishwashing. It shouldn’t be used for most things as a primary disposal method.

If you want to get rid of food waste without adding to your weekly trash pickup, you could consider composting. It is pretty convenient for almost any size yard, saves room in landfills, and can be used later as mulch.