HVAC Options For A Finished Basement 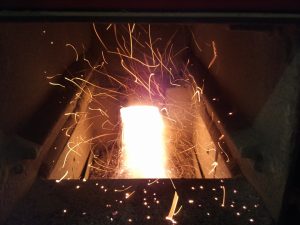 HVAC Options For A Finished Basement

In recent decades, finishing a basement has become a popular way to get more living space out of your home, whether as a playroom, a rental, or something else. If you’re thinking of finishing your basement, or if it’s already finished, you should know about your options for heating and cooling it.

“Registers” just means the vents that blow air out into a room. If you have ductwork already running through parts of your basement, this may be the most cost-effective measure in the long term. Even if there’s no ducting down there, you can have more put in. It would raise the cost a bit, but could still be worth it in the long run. Check with an HVAC technician to be sure your system can handle the extra burden, since it may only have been designed for the square footage of the upper floors. But if it can, new basement ducting can be a great option.

You can also get individual and movable AC units for your basement. Like the fuel-burning stove above they have to be vented to the outside, but for a different reason: to evacuate the hot air from the condenser coils, or else it will just go back into the room and defeat the point of the AC. Since that air is so hot, you would ideally keep the unit as close as possible to the wall where the vent leads out. And maybe consider insulating the unit’s flexible duct with some semipermanent layer to prevent heat leaking off it into the room.

These work best in places where it’s dry most of the time, but evaporative coolers do not need to vent to the outside, use less energy than traditional systems, and often cost less upfront. Better yet, they are usually portable and can be used outside on a deck or patio!

There are heater units that can heat small, medium and large open spaces like a basement by burning some kind of fuel. Most of them, like pellet stoves, have to be vented to the outside, but that won’t require too much modification. This won’t take care of your cooling needs during the summer, but it’s a viable option for climates like Northern Virginia where basements are naturally cooler than the rest of the house.

A large heater like a pellet stove can work well for a large open basement, but if your basement project involves putting walls to divide it into rooms, you would want more and smaller units. Electric space heaters are affordable and easily portable, but if you use them, make sure to follow all proper safety practices, including not leaving them on in unoccupied rooms.

Finishing your basement is almost always a savvy investment in your home, and heating and cooling are things you want to know about when calculating if it’s right for your home. We hope we’ve given you some ideas to help you decide. If you’re in the Northern Virginia area and want to finish your basement or just have, call Twin Air in Manassas at (703) 754-1062 or get in touch on our website.