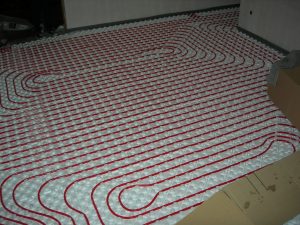 Radiant floor heating is a heating system consisting of pipes running underneath the floor to circulate heat, usually by means of hot water. The same basic concept has been used since Ancient Rome: the heat moves upwards from the floor, warming the entire space, leaving no cold spots, and losing less to drafts because the system doesn’t depend on air circulation. The lack of forced air can also make them more comfortable for people with allergies.

They are also long-lasting, sometimes going for decades. The pipes will often exceed the lifespan of the building, though other parts will need periodic checks and replacement. The fluid handled through the pipes is low temperature and low pressure compared to many other systems, so the system is never really under stress.

A lot depends on the pipes

The pipes in a radiant system used to be made of copper or steel, but in recent years a cross-linked polyethylene called PEX is most common. Copper made sense back in the day because it conducts heat well and is highly malleable. Many modern appliances like dishwashers and water heaters still use copper to conduct hot water. Steel is usually cheaper than copper but harder to fix than copper, which can be easily patched if it corrodes. Modern PEX tubing is so useful because it eliminates the possibility of the tubes corroding.

But even without ducts or filters, it still needs maintenance, so let’s talk about what that entails.

Pressure check. The radiant system is closed and thus should have the same pressure all the way throughout at all times, specifically somewhere in the area of 10-20 psi. Low pressure can mean a leak in the pipes, and in addition to reducing the efficiency of the system, the water that escapes may cause rust or rot in your home. If the pipes are copper, it is sometimes possible to patch them, but steel corrosion will usually require all the pipes to be replaced. Polyethylene largely eliminates the danger of leaks.

Unlike so many other systems that involve fluid lines, flushing the pipes is not only unnecessary for a radiant system but actually not recommended unless absolutely necessary. If the pressure is where it needs to be, it’s best to leave it rather than risk changing the pressure up or down, or ( in the case of metal pipes) allowing in the oxygen that could lead to corrosion later. Talk to a trained technician if you think it does need it.

Pump cleaning. The pump normally operates pretty silently, so if it’s making noise then that might mean a problem. Unlike the pipes, it needs regular cleaning and replacement, so checking it is part of every routine inspection.

Valve check. The relief and reducing valves are crucial to the system’s operation because they make sure the pressure never gets high enough to damage the pump. Valve failure leads to pump failure, so they’re like the first line of defense for the whole system.

How do I know if something’s wrong?

Since the system is mostly under the floor, you might wonder how you’re supposed to know when it’s time to call in the professionals. Here are a few tips to help you.

If you have a radiant floor heating system and don’t know how long ago it was inspected, Twin Air in Manassas can inspect it for you. We serve the whole Northern Virginia area and can answer all your questions about maintenance options and replacement options and estimates. Call us at (703) 754-1062 or email us on our website.